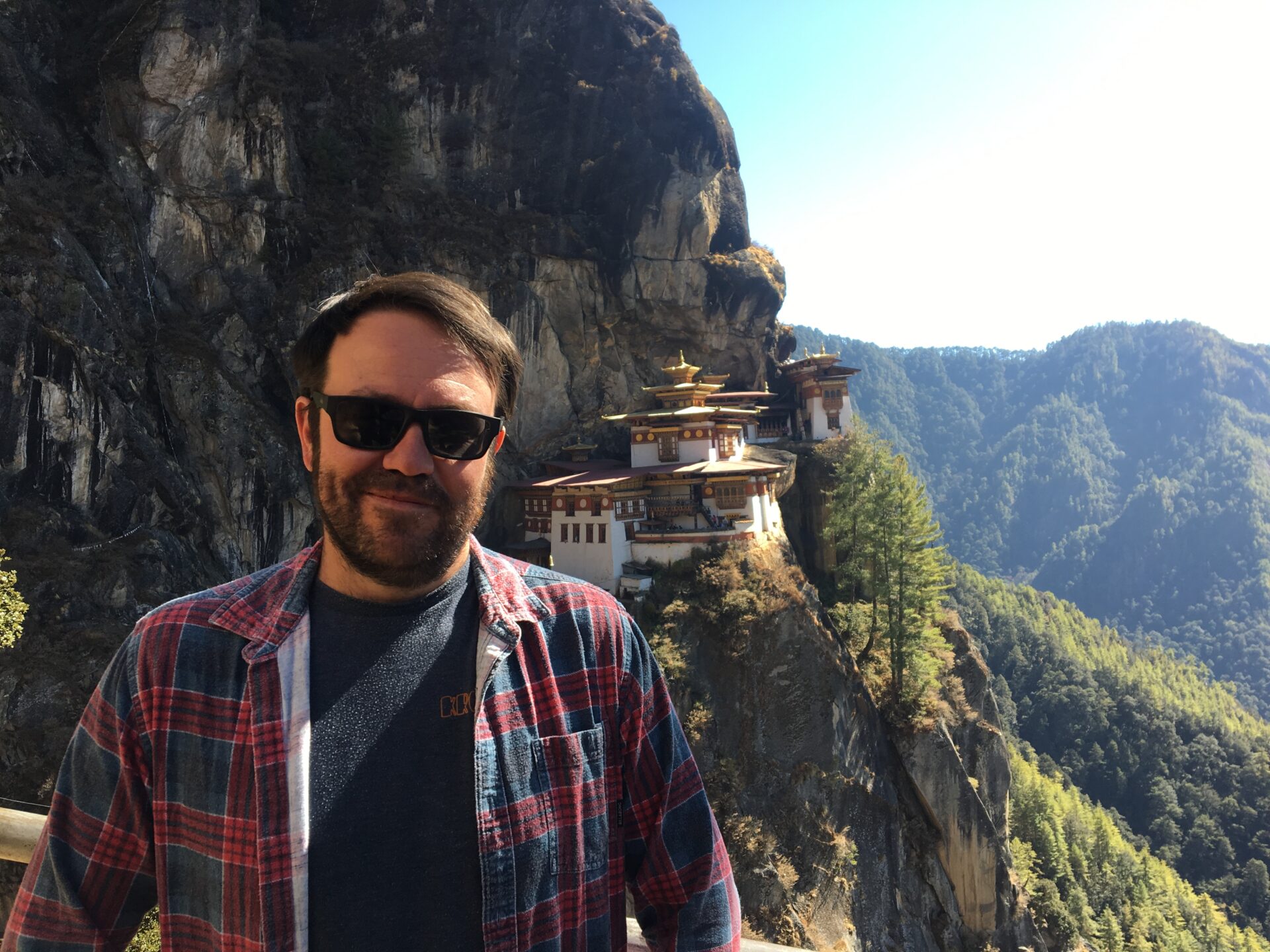 Home / Latest News / Interview / The Geological History of the New England that we take for Granite.

The Geological History of the New England that we take for Granite.

UNE Sci-Flicks… The event series that links a movie featuring scientific themes with research that is happening here at UNE!

Hosted at Belgrave Cinema, the next movie in the event series will be San Andreas with a discussion from geologist and lecturer from the UNE School of Environmental Science, Dr Luke Milan!

San Andreas is an action movie starring Dwayne ‘the Rock’ Johnson that focuses on a major earthquakes on the San Andreas fault devastating Los Angeles.

In the lead up to the event, we spoke with Dr. Milan about some of the themes you’ll notice in the movie and some mind-blowing facts about the geological history of the New England Region’s!

Why San Andreas as a movie for discussion?

Good question. I often find general knowledge on earth science and geology in the broader public is surprisingly small. This is a shame because our planet is amazing and sustains us and every living thing on it, but a lot of us know very little about it and how it works! When people think about our planet, they tend to think about living things and the natural environment. But knowledge of why that natural environment is the way it is and why it looks that way, how it came to be, and what is beneath the surface is often never thought of. Many people also forget how complexly intertwined we are with our earth. For example, just take a smart phone, most people would be blown away by the sheer number of different minerals needed to build one. It’s also not common knowledge that with our shift toward renewable energy that means there is an equally big shift to different minerals and metals for building electric cars and lithium batteries for example. Technology is moving so fast we cant predict what minerals we will need from earth in the future!

So, anything that talks or educates us about our rocky planet and the geology of it is a good thing… even if it might be tied with terrifying geological hazards such as in this movie!

What are some of the themes highlighted in the movie?

With love interests and other themes aside. This movie is fundamentally talking about prediction of earth quakes, and the types of hazards that are caused by earth quakes, such as tsunamis and destructive ground shaking.

It’s a Hollywood movie and it’s an action movie, so naturally they have done a very Hollywood thing and have put their creative licence on their portrayal of a natural disaster. The carnage portrayed in the movie is overblown. For example, the first earthquake we see has a magnitude 7. This shouldn’t have caused the Hoover Dam to fail catastrophically. That dam would have been designed to withstand that magnitude quake I am quite certain. There is also no way the hoover dam would explode in that way.

Also, in the large main quake event there is no way all those buildings would have just toppled. There is modern design, engineering, and building standards in places that are earthquake prone, and they just don’t fail like that.

The other key issue is prediction. We have no way to reliably predict earthquakes, despite a lot of study. The “magnetic pulse” warning system that apparently shows when earth quakes occur is fantasy.

It’s common for many people to feel anxious after watching a disaster movie like San Andreas, but what are some of the things we can learn from watching it and attending the sci-flicks event?

We are very lucky in Australia because we are located in the middle of a tectonic plate meaning we are far from the danger zone right at the edges of the tectonic plates. That buffer zone means we don’t regularly experience extreme earthquakes, but it doesn’t mean we have no earthquakes at all. So, while we still have some earthquakes as our plate moves to the north and releases stress from time to time, earthquakes are nowhere near as frequent. The magnitude of earthquakes depicted in the movie are unlikely here. When Australia finally collides with southeast Asia many millions of years into the future it will be an issue – but until then we can relax.

If you do you happen to find yourself in an earthquake get onto the ground and move to a structurally sound part of a building or underneath sturdy furniture. If you are outside, get away from buildings or where things might fall. If you are by the ocean, things like water rapidly draining from the harbour, is realistic and can occur before a tsunami. That would be a red hot warning to get to higher ground as soon as possible. This is why tsunamis are also called tidal waves.

Are there any similar fault lines in the local New England region that was like this movie?

It’s amazing that yes, there is an ancient fault that is over 1500km long that perhaps could be viewed as a kind of ancient correlative of the San Andreas Fault. Back then this region was right at the edge of a tectonic plate that held the super continent of Gondwana. It is a huge crustal structure, and even has the same rock types within it that occur in the San Andreas Fault! There would have been significant earthquakes associated with this structure but that was over 260 Million years ago.

Today, it’s deeply eroded and forms a belt that swings around from Port Macquarie, to Nundle, up past Tamworth, towards Bingara and keeps going. Because Australia is far from the plate boundary, we don’t see the types of earthquakes such as what are depicted in this movie. However, back in geological time when we were at the edge of the plate boundary there would also have been added geological dangers such as volcanic activity!

The New England is known to have had ancient volcanoes erupt around the region, how long ago were these volcanoes active?

Yes there are remnants of extinct volcanoes in the region, and they span quite a large period of time reflecting the really diverse geological history of the New England region. I think most of us would be familiar with some of these in the local area, but probably never knew it. There are lava flows on UNE campus and volcanic plugs all around Armidale. Some of the notable volcanoes are the Ebor volcano. If you have ever been to Point Lookout, then you have stood on it! Or maybe if you have stopped at Ebor falls you might have seen some of the lava flows from this same volcano. This volcano erupted about 20 million years ago, so geologically speaking it’s just a newborn baby. UNE geologists (led by A/Prof Paul Ashley) have researched this volcano and found that it was at least 45km across and 800m thick. However, in its short 20 million year history about 90% of it has been eroded away. These types of eruptions were more akin to the ones that occur in Hawaii.

This contrasts to about 250 million years ago when the region would have been a dangerous place with huge disastrous eruptions. There are deeply eroded scattered calderas right through the region that were the source of these catastrophic eruptions.  These eruptions would make Mt Vesuvius that took out the town of Pompeii in 79 A.D. look tiny. Researchers at UNE (Prof Ian Metcalfe) established that huge numbers of the volcanic ash products of these volcanos can be seen in layers of the Sydney basin as far away as Wollongong, and right up past Bowen Basin in Queensland, and the eruptions were all from our backyard 250 million years ago. The volcanic vents that produced these eruptions are known as calderas which are low circular structures, where the ground has sunk. If you have ever been to Kings Plains National Park, the Emmaville region, or up around Tenterfield and Stanthorpe, you have likely been within an ancient eroded caldera or have been on the volcanic products that erupted from them. Some of these calderas are up to 20km across. Underneath these there would have been vast magma chambers of liquid magma. That magma was then erupted out in one of these huge eruptions and the void that was left behind meant that the ground subsides forming the circular depression -a caldera. It would have been a pretty exciting place about 250 million years ago. A team of us at UNE (Dr Tim Chapman, Prof Ian Metcalfe and myself) are currently researching these significant rocks.

If our region was prone to volcanic activity in ancient times, why not now?

Well similar to what I was saying above, about 250 million years ago when those calderas formed, Australia was part of the super continent Gondwana and we were right in the ‘danger zone’ on the edge of the tectonic plate. So now that we are far from the edge of the plate and the subduction zone, which is important for producing volcanoes, the volcanic activity is no longer a threat.

The young 20 million year old volcanoes are a different story however. When they were born the edge of the plate was about where it is today. You might have even been on part of it, as it passes right through the South Island of New Zealand. These younger volcanos have been long thought to be related to a spot in the mantle breath of our plate that is like a blow torch of upwelling magma. As the rigid tectonic plate moves over it the underlying mantle, these stationary blow torches of magma can pierce through the crust and spew runny lava out of volcanoes in a chain as the tectonic plate keeps moving. Although recent research is debating if all of the young volcanoes formed this way and offer plausible processes to show some could have been triggered by other means.

What is your favourite fact about our region/ or volcanoes more generally?

I have so many. Where do I start. While I’m not going to lie, I would dearly love to see an active volcano in the region (a lovely active but safe one that is!). What I do like about the region is that we are blessed here because the region has experienced several kms of erosion. This allows us to look inside what an active tectonic plate margin would look like today. I have been to many active plate margins and while super cool, you just don’t get to see the processes and internal working of what goes on inside them. Here, we are lucky in that we can, and that’s what some of us are working on research wise at UNE.

If you liked reading this, you’re also going to LOVE the new Podcast that Tune!FM produce’s for Sciflicks – check it out!

Ophiolites with Luke Milan from LLUNE

Ophiolites with Luke Milan from LLUNE

Make sure to come along 12 August 2021 to the screening of San Andrea at Belgrave Cinema.
Mary will be there afterward to discuss the various themes of the movie and answer any questions you have.
Grab your tickets now!

Life as a parent at university, with Michael Murphy

Life as a working mum: Dr Lili Pâquet gets real with students

Acknowledging your commitments, and knowing when to say no.

How to craft the perfect cover letter.

A glimpse into student life with Lochie Brooke