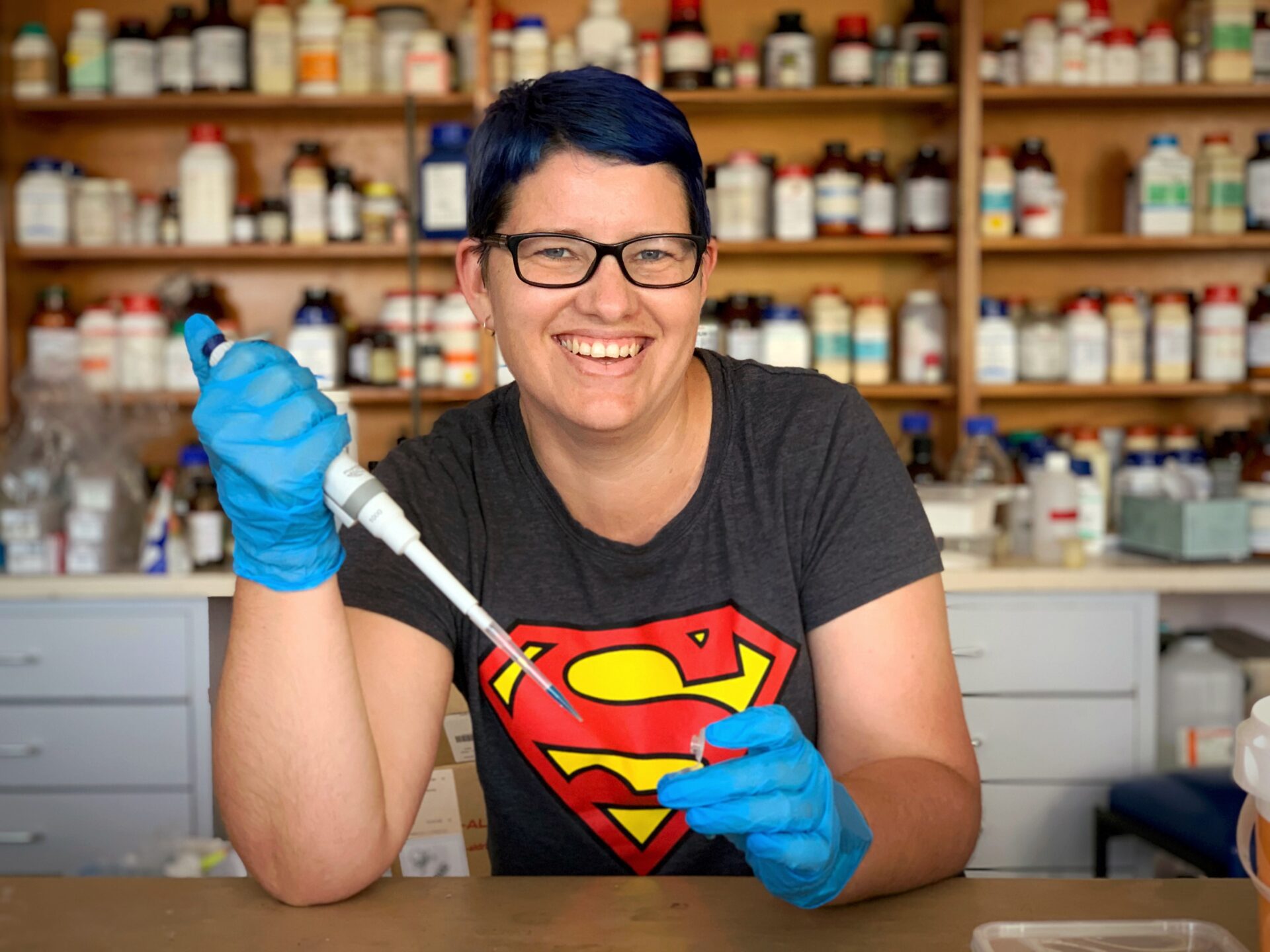 The line between genetic enhancement and science today

You must be lost in some crazy intergalactic trip if you haven’t heard about UNE Sci-Flicks… The event series that links a movie with scientific themes with research that is happening here at UNE! Did we mention it also takes place at Belgrave Cinema? Which means you can see some of your favourite old-school sci-fi movies on the big screen, and then hear about some of the interesting research/busted myths behind the movie.

The next movie up for discussion is Gattaca with Senior Lecturer in Biomedical Science Dr Mary McMillan, a movie that tests the limits of science and human nature.

In the lead up to the event, we spoke with Dr. McMillan about some of the themes you’ll notice in the movie and how genetic enhancement isn’t as far-fetched as you may think!

Tell us, why did you choose Gattaca as a movie for discussion?

Gattaca has become a bit of a cult classic – when it comes to talking genetics and biotechnology it’s the one movie that immediately comes to mind. I think what makes it so good is that it’s science fiction that could so easily become a reality. In that way it is quite provocative – it challenges us to think about our own beliefs and perceptions about what it means to be human and the impact that science can have on us as a species. It also has an amazing cast – who doesn’t love a bit of Ethan Hawke, Jude Law, or Uma Thurman?

What are some of the themes highlighted in the movie?

Gattaca revolves around the idea of a society that uses genetic engineering and reproductive technologies to produce genetically enhanced humans – near-perfect people. People’s role in society is determined by their genetic makeup, and non-genetically enhanced people are seen as inferior. Rather than just focusing on technology, the movie explores the ethical and social issues surrounding genetic enhancement – what does it mean to be perfect, and what does it mean to be human?

How are these themes relevant to our society today?

When Gattaca was released the concepts of genetic engineering were still somewhat in the realm of science fiction – sure we had the technology to manipulate DNA, but not to the extent that we do today. In the years since the film released we’ve seen huge advances in the field of biotechnology – CRISPR, a tool used for gene editing, has become almost a household name, biohackers are experimenting with genetic engineering in their own basements, and the world first gene-edited babies have been born. The genetic engineering described in Gattaca is now something that could arguably become a reality. Sooner, rather than later, we need to have these discussions about the legal, social, and ethical implications of it all.

Eugenics is basically a set of beliefs and practices that aim to genetically improve the human population. It’s founded on the idea that some groups of people are superior to others – physically or intellectually – as a result of their genes, and that we could improve the population using selective breeding, in much the same way we do for sheep or cattle. Eugenics became quite a popular academic discipline during the early 1900s, and these ideas also spread into political circles. Around that time many countries adopted eugenic policies, with programs that encouraged those considered as superior to have children while implementing measures such as forced sterilisation of people who were considered unfit to reproduce. Eugenics was at the heart of policies implemented in Nazi Germany, beginning with the mass sterilisation of those considered to be “genetically diseased”, and leading to the genocide of European Jews. Following World War II eugenics fell out of favour and most eugenic policies were abandoned, but there are still those who support or endorse eugenics as a science today.

Is genetic enhancement part of science today, and if so, how is it being used?

Genetic enhancement is a huge part of science today. Scientists are constantly tinkering with things like cropping plants to improve pest resistance or yield, or with animals to improve production traits, or with microbes to produce important pharmaceutical products (insulin anyone?). These all involve genetic enhancement – either through traditional breeding methods that select for certain genetic variants, or using modern genetic engineering technology. But so far (with the exception of the gene-edited babies!) we’ve decided at a society that genetic enhancement in humans is kind of off-limits….at least for now.

What has started happening with humans though is embryo selection during IVF. In many parts of the world couples undergoing IVF can choose to discard embryos that don’t pass a genetic “health check”, they can choose an embryo of a particular sex – and now can even choose a particular eye colour. It’s not genetic enhancement as such – the embryos aren’t being altered genetically, but are selected based on genetic makeup– but it does seem like it could be the start of a slippery slope. Now that we have the technology to edit genes, how long does it take before we do decide to start using it in this context? Perhaps just a little tweak here or there, maybe to prevent disease (this was the justification used by the scientists behind the gene-edited babies), or maybe to change eye colour, or hair colour. With the speed at which genetic technologies are developing, the question is quickly becoming less “can we do that?” and more “should we do that?’.

Why is eugenics a problem?

The concept of eugenics means that some traits are going to be considered as desirable. By definition, this means that other traits are must be considered undesirable. The whole system challenges the idea of human equality, and creates discrimination and stigmatisation of different groups. Throughout history, eugenics has been used to discriminate against people who are poor, who are deaf or blind, who have mental health disorders, or who are from different religious or racial backgrounds, and has led to massive human rights violations and genocide.

Eugenics also has flaws at a more practical level. It assumes that all “desirable traits”, whether it’s physical prowess or intellectual ability, are determined to a large extent by genes, and ignores the significant role that environment plays in determining so many human characteristics. There’s also the issue that eugenics policies – which aim to select for “good” genes – can lead to a loss of genetic diversity…creating populations of people that are more genetically similar to each other, and at greater risk of extinction. Just ask a cheetah how well low genetic diversity is working out for them…

A little side step from Gattaca, Marissa mentioned you are a Curious Minds mentor and Superstar of STEM! What do you enjoy the most about your involvement with these initiatives?

When I was growing up I didn’t know any scientists or have access to any of these sorts of initiatives. Looking back I would have loved to have those connections and role models, I think these things can make a huge difference in our lives, especially for young people. Now that I have my own career established I see these programs as an opportunity to give back, and to help make sure others have those opportunities for mentoring and guidance. I also really love telling stories – about science, about careers – and hearing other people share their stories. These kinds of initiatives allow me to do that – and to connect with all kinds of amazing people across the country.

What other initiatives are you also involved in?

My scientific and academic career has given me so many opportunities to be involved in so many different initiatives – I’ve been part of the global Homeward Bound Leadership program for women in STEM, I’ve worked with teachers through the CSIRO STEM Professionals in Schools program, and skyped with classrooms worldwide through Skype a Scientist. I also work with the Australian Academy of Science through their early and mid-career researcher forum and was part of their STEM Changemaker program last year. Now that I write all that down it seems like kind of a lot…is that why I’m tired? Haha.

If you liked reading this, you’re also going to LOVE the new Podcast that Tune!FM produced for Sciflicks – check it out!

Thanks, Mary, for your time speaking with us. The genetic enhancement makes for an interesting conversation!

Make sure to come along this Thursday evening to the screening of Gattaca at Belgrave Cinema. Mary will be there afterward to discuss the various themes of the movie and answer any questions you have. Grab your tickets via the event page here.