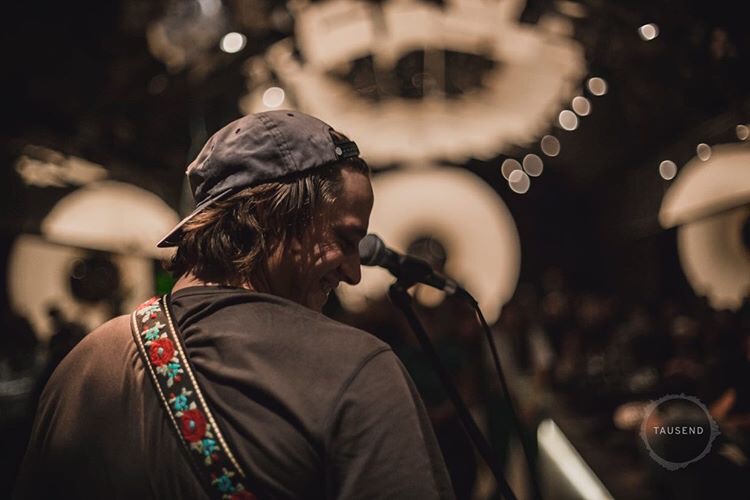 Interview with Will Henderson, Musician

Images have been provided by Will Henderson

It’s not often that I get to write about people I’ve known for a long time! So, I’m pretty ecstatic to share a little love for this guy and his incredible talents! Introducing the effervescent Will Henderson. If you grew up in Armidale, you’ve probably seen him gigging in and around the area. Since school (I’m not even going to make a joke about how long ago that was now) he has lived abroad, created a range of phenomenal tunes, held gigs in countless places, collaborated with some seriously cool cats, and had a ball along the way. Our good ol’ friend COVID may have brought him home for a little while, but it’s certainly not cramping his style!

Enough of my blabbering, let’s find out more about this #CreativeNewEnglandAu talent!

How did you get into the music world?

My mum taught Suzuki violin in our loungeroom since I was a baby, she actually made me a little violin out of a ruler taped to a muesli bar box with a chopstick for a bow! As I grew up, I wasn’t allowed to quit violin, only swap instruments when I wanted – so guitar became a bit of an obsession when I was just starting high school at Duval High School.

I got into the Encore Concert at the Opera House and then some scholarships at the Sydney Conservatorium of Music where I learned how to hustle gigs whilst I was studying. Now, I’m a full-time musician touring most months of the year around the world.

Unfortunately, COVID put a little stop to it this year, but you can check out some past tours here.

Your family played a huge role in your creativity, can you share a little memory from your childhood about this?

Oh, yeah. Our Grandma had a house at Sandy Beach, at Christmas, we weren’t allowed to go to the beach before practicing, so in a way, we had a musical kick up the butt, that we didn’t really like at the time… but it gave me a whole heap of musical facility in hindsight and has made it possible for me to be able to pursue a career in music.

I’m forever grateful for my parent’s time, effort, and tenacity!

You can play a range of instruments – how and when did you learn all of these?

I learned Violin from the ages of 3-13, at this point I transferred across to guitar, at 19 I saw Fat Freddies Drop and The Cat Empire one weekend in Sydney, and had some scholarship money from the Con, so I dropped it on a trumpet, singing came along the way as I learned to play old jazz tunes in Sydney, and busking on the streets in Berlin.

My mum gave me a Violin for my 30th birthday, so I have started revisiting it and putting heaps of string parts on my current tracks. I have learned singing and trumpet mostly from listening to my favourite singers and trumpeters and stealing inspo from their licks.

I heard you studied Flamenco too?

I studied classical guitar at the Sydney Con, and halfway through I changed to mostly jazz subjects. I got super into Flamenco and Brazilian music because I wanted to expand my horizons gig-wise, to make people dance, and to collaborate with other musicians.

I met one of my best mates ever Pablo,  we started a band – Los Monos, and did our first ever little tour of Europe together. After that, I also had a group called Pena Flamenca in Sydney, which was heaps of fun. I studied Flamenco guitar in Australia with Damian Wright and Gerard Mapstone and also on the ground in Cadiz, Sevilla, and Madrid where I had to quickly learn a fair bit of Spanish as well, it was a super wild time!

I bought an incredible dream guitar custom made for me from Rafael Romero which is still my main ax, although I haven’t played much Flamenco over the last few years as I’ve been concentrating more on singing, trumpet, and production.

You can have a little listen here…

You’ve lived in Berlin for the past few years, what’s so special about the music industry in Berlin?

We had the most epic used house parties jams where hundreds of musicians used to play all night long in Sydney and Berlin has been chockablock full of beautiful new mates and musicians wanting to share and create like crazy.

There are a few reasons that Berlin has held us for so long.

People absolutely froth on, respect and listen to music. Crowds are captivated, and incredible over there. Which really goes a long way to make you feel like you’re doing what you should be. There are so many shows that we have had over there that were full body bliss attacks due to the amazing audiences and vibes.

It’s close to everything, so great for touring and playing festivals across Europe which is what we do for most of the year. It’s also a melting pot of like-minded legends who all have time to study, create and explore what they want as life there is still relatively cheap and people are super open.

COVID has really shook the world – how has this affected you as a musician?

Most of what I have done as a musician has snowballed from people seeing us places. The festivals have gotten bigger, funner and the conditions way better. So far, this year, we have lost about 30 festivals. It has massively affected the 8 bands, and about 20 musicians that I financially support through booking shows.

Not knowing what’s going on or when things can reassume and losing all of the momentum we have spent the last 8 years creating can be pretty mentally taxing, but we are extremely lucky to be stuck in Australia currently!

There is a lot more space here than our 50m2 apartment in Berlin. We have been helped by the government and grants, and we have caught up on precious family time that we have missed over the last 8 years.

COVID has had a few positives that include me finally getting things together and updating my website! I have also had the chance to finish off the plethora of tracks that I’ve been sitting on like a broody chook.

If you’re a linkaphobe here is a summary of some of the music we make!

How would you describe the music that you create?

For the last year I have concentrated on production, which means I have drunk heaps of coffee and sat in about 4-5 different studios of incredible minds around Berlin weekly, and learned a whole lot of ways to shape sounds and chase my taste in music.

I have always been super fast and hands-on with playing and songwriting so this has been a great way to explore a completely different way of creating tunes.

Are you working on any special projects that we should keep our eyes peeled for?

Yeah, coming up in the next month – Gimme Gimme will be releasing “Silk”. There is a Hektisch Kunst track called “Swimming lessons”, a hip hop album called “Flightpath” by the Conscious Pilots, a song with a mate Ollie called “Too bad to be true” and a single from the Milkshakes called “Do heaps less”.

I also have a bit of my own solo stuff, it’s almost ready to drop which is super exciting, as it will be the first time I have released something as a solo project! Oh and, I have a slow relaxed track called “Painting the wind” with a film clip we shot on 8mm over in Western Australia.

Where do you find your inspiration?

Inspiration often strikes when I come across interesting, funny, or unusual, even ways that words come together. These often perfectly and humorously encapsulate an idea or phenomenon of the present cultural climate which then becomes a premise for a song. This often happens when I’m having an awesome time with friends or meeting new minds, in a beautiful place. I quickly write it down in my notes and use it when I’m sitting down on my DAW (Digital Audio Workstation) or with a guitar.

I find inspiration is like a tap you often have to turn on if you want to produce lots of art. This tap gets easier to turn it the more you put yourself into a creating/writing situation. With practice, you can get better at finding it quicker. I’ve found from experience, that you won’t get much done if you wait around for inspiration to hit you – although it’s absolutely dreamy when it does.

What is one message you would give to any aspiring musicians?

Start singing, it’s not a magical talent, an inbuilt mystery or something you’re born with, it’s like everything else in the world – you have to do it every day and will eventually start liking where you’re at. It helps with everything musical and makes you feel happy as.

Use music as a vehicle, pick where you want to see in the world, and book shows in that place (we usually do 4+ months in advance), it’s the most amazing way to travel, meet people and get better at what you love.

Another good one is to set yourself a 20 songs in 20 days challenge (you can finish off old songs of course), it always helps to give yourself deadlines to finish things, and finishing things is a very important skill as a musician!

Do you have any other hobbies, that influence you creatively?

I often rework lyrics when I’m surfing. I heard that people get eureka moments in the shower due to the water clearing the air particles so I reason it must be something similar.

And finally, what’s your favourite thing about being a part of the New England community?

Armidale has always had such an epic music scene, with amazing teachers and an extremely supportive community. It was was lush place to grow up in, I had sick times making treehouses with my big brother down at Dumaresq Creek. Bellingen was also fun, we lived on a Kangaroo Paw farm and having two extremely amazing supportive music teaching mothers.

It’s beautiful to see so many familiar faces when we come back on tour and some great new venues popping up all over the place!

If you’re looking for something to keep you inspired why not check out Creative New England or join their Facebook group to keep in the loop with up and coming competitions and projects!

There’s something for everyone! #CreativeNewEngland