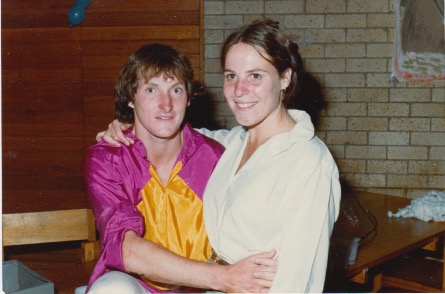 Blog and interview by the  lovely Kate Ryan, Work300 student.

This year is the 40th Anniversary of the annual Earle Page Coast Run Fundraiser. This awesome community event has helped to raise over half a million dollars in the past 40 years and, invaluable awareness for the Children’s Medical Research Institute (CMRI).

The EPC Coast Run is unique. It sees current and previous college residents come together to “do some good” and has formed a special place in the hearts of many students, staff, and UNE alumni. Typically, participants run from the EPC College Campus, all the way to the beautiful Coffs Harbour Jetty but this year it’s taken a little twist.

As you are aware 2020 has been full of many ups and downs. Never fear, none of this can crumple the Earle Page spirit. So, what’s this little twist we speak of? In light of the current global pandemic, the Coast Run will be going virtual. This means that literally wherever you are, locally or globally, you have the opportunity to support this wonderful cause.

To help get the ball rolling, I caught up with Brent Gregory. Brent is now a lecturer in Accounting at the UNE Business School, but forty years ago he was a student residing in Earle Page College and one of the founders of this event! As an EPC girl myself, I wanted to chat with him to learn all the ins and outs of how this wonderful fundraiser has grown over time and to talk about the pivot to the virtual event this year!

Tell us, why is the Coast Run Fundraiser important?

Coast runners across, what is now the best part of half a century, will know the phrase – “doing it for the kids”. The run is about community. The community has become increasingly important in our world and the Earle Page community has a role to play in making our world a better place.  The run is in support of the CMRI. The fundraiser is a fantastic opportunity to live up to the Page motto – “each prove yourself”– and it is somewhat similar for all colleges.

College is a place where people develop skills to solve difficult problems and to learn to work together as a community.  So, this not just about overcoming our current challenges it is about preparing ourselves for future challenges. At Page, we have found the best way to add value to society is to work as a community.

When you bring smart, committed people together to work toward a challenging, worthwhile goal then great things can happen.

How has the event changed over the years, and especially this year?

Since 1980, the core values, the core purpose, and the core event have stayed much the same. Coast run has become bigger and more complex to operate.  It is a much more professional operation than what I started in 1980. For example, there are more events conducted by the coast run community.

The 1993 convenor, Genevieve Maher, started the Fashion Parade and that has become one of the highlight events on the Calendar. In 2005, Tim Purser started the discount card, and this has been a major source of funds.  So, you can see that instead of the one simple event, it is now a multi-divisional entity and it requires the involvement of the majority of college to make it work.  On top of this is the increased regulatory requirements.  The police and local government are all requiring much more evidence of our planning and our competence.

How it has changed this year has been massive.  When EPC student Lewis Wilde agreed to be convenor for 2020, he could not have imagined the extent to which it would absorb his time and for much of that, doing things that ultimately became unworkable. So, he was in a position where the run to Coffs Harbour couldn’t actually happen this year. But these are the circumstances in which the energy and values of a college become more visible. From this seemingly impossible position – Coast Run Goes Global has emmerged.

This year is our Global Event – Coast Run Goes Global. For this event, we are reaching out to all past Coast runners for their support. We are asking them, wherever they are in the world, to get their running or walking shoes on and clock up as many kilometres as they can for the week September 13 to 20.  You can register for the event here.

So, you need to know, there are two parts to this event.  Firstly, there is the local part, which is a bit more low-key than normal because of COVID.  This will be launched at 10:00 am on Friday 18th September at the front of the (Earl Page) college. This is quite typical of a normal start of Coast Run, except much later and we won’t be heading to the Coast, our run will be around the UNE grounds.

We now need the support of all the extended coast run community to make this event a success.  We would like to get over 8,000km in total.  This represents 200k for the 40 years of Coast Run.  While at first glance this goal does not appear achievable, we do want to see how close we can get to it.  We will clearly need a lot of help to do this.

The EPC Coast Run has supported the Children’s Medical Research Institute for years, why did you choose to support this charity, and have you supported any other charities?

The choice of charity was really the result of the intersection between our values and logic.

Our key value was the quality of human life we also appreciated the value of community. When we had decided that we wished to make a contribution to the world we decided that in order to maximise our contribution we would use our efforts to leverage off and support the ability of others.  So, then the logic kicked in.  If we wanted to make maximum contribution to quality to life than we should focus on babies because they had the most time to live. We felt that the prevention of disease would be a great place to start. We realised that we could not do that and so we decided to support those that could.  That is why we firstly supported Foundation 41. They researched the first 41 weeks of human existence, from conception to the first week of life. Then from 1989, we have support CMRI (Children’s Medical Research Institute) who are committed to finding treatments and cures for children’s genetic diseases.

We heard along the grapevine that you met your wife Sue in College?

Recently, August 27 was our 37th wedding anniversary and we were together for over 4 years before that.  And, yes, we have been together since our first year in college. My first recollection of Sue was from very early in the year.  I had just arrived back in college from a floor BBQ at the Blue Hole at about 4:00 pm. I ran into Sue, and she enquired if she was too late to catch the bus to the Blue Hole because she had just woken up. So, while that created a strong impression, it was not necessarily a positive one. Sue gave out the persona of being a bit of a party animal, and she was involved in a lot of things.  It was not until the second semester that I got a lift to a party with her. We got chatting at the party, and I thought that underneath that party persona was a very intelligent person that I wanted to get to know more about.

We have been together since that day and we have operated pretty much as a team. So any contribution that I have made to Coast Run has been made possible by the support I have had from Sue.  A team makes a big difference in achieving results.

We now have three kids and they participated in Coast Run from the moment they could walk. The two eldest (Myee and Boahdan) lived in College. Before Myee started university, she made a short documentary on Coast Run called “In the Long Run”.

Boahdan, ran 200k for Coast Run Goes Bush. Our youngest, Kas, went to the University of Newcastle.  While he was there, he initiated an event that supported the EPC Coast Run. They each have a strong focus on health and fitness and have a strong social consciousness and understand the importance of adding value to society.

40 years is a lot of experience, can you tell us a few of the highlights?

Being involved with the Coast Run Committees over the years has been such a fantastic experience and there have been a lot of fun times. Along with this, being with someone when they have achieved something, they did not think that they could do, is amazingly energising. The coast run has provided a multitude of those events.

Highlights that spring to mind include;

Honestly, there’s so many!

Brent, thank you so much for your time chatting about this incredible event and all of the passion that goes behind it! We can’t wait to hear more about this event as it unfolds and we’re so excited for more highlights to be shared! Thank you for being such a huge part in this fantastic community event!

This year the EPC Coast Run goes Global – you can join this journey from anywhere in the world!