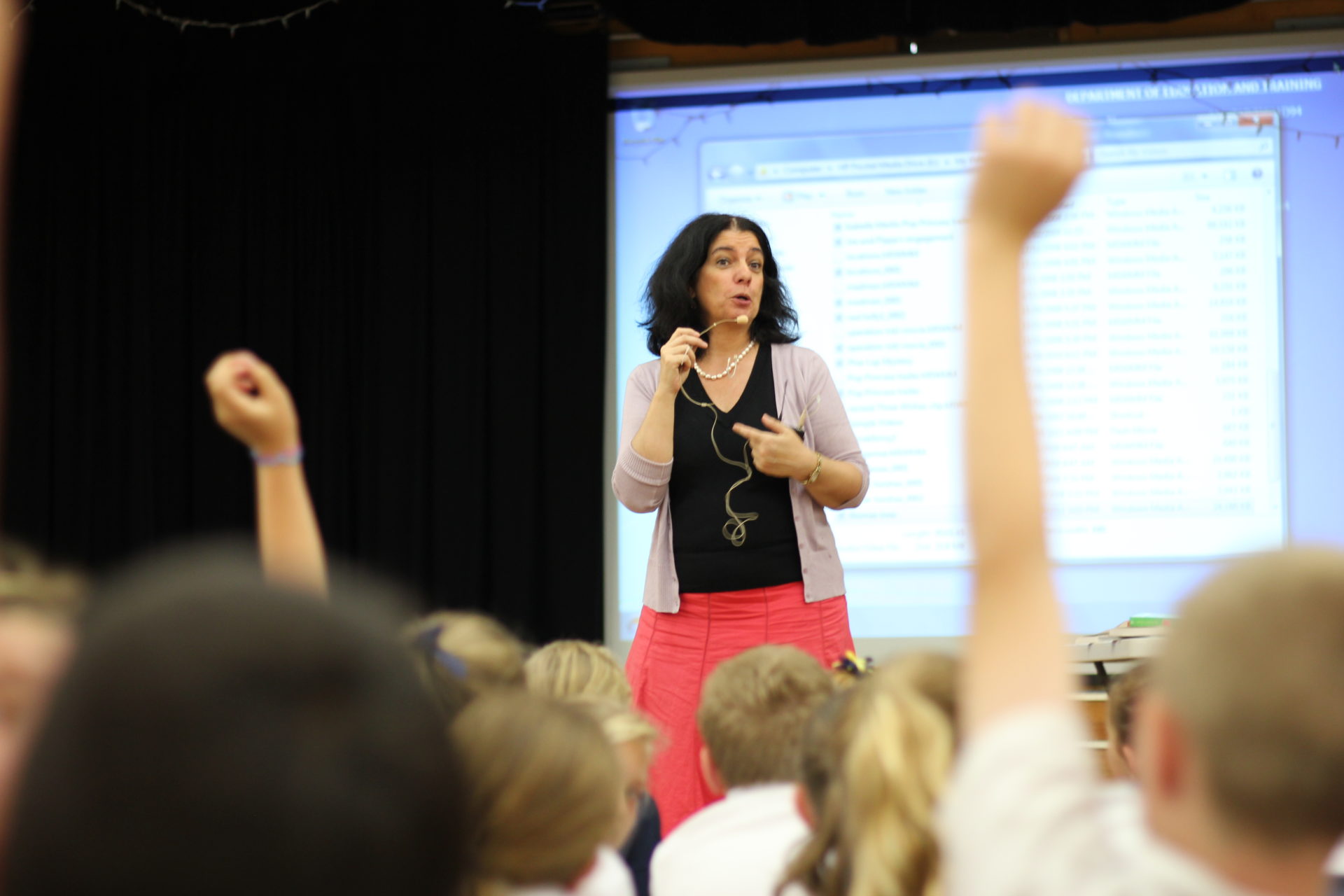 The team at Creative New England is creating a range of exciting competitions for one and all to get involved in over our lockdown period.  We were lucky enough to spend some time chatting with the lovely Sophie Masson, local Author and member of the New England Writers Centre

Tell us a little bit about your job as an author and how you got to where you are today.

It’s a bit of a long story, so I won’t inflict it all on you, but basically, my first two books–one an adult novel, The House in the Rainforest, the other a children’s novel, Fire in the Sky–were both published 30 years ago, in 1990, within a few months of each other. (By the way they were both launched at UNE!) Before then, I’d written two other novels which got rejected by every publisher I’d sent them to, but I’d had several short stories, poems, and articles published in anthologies, magazines, and newspapers. Since 1990, I have had more than 70 books published–have been continuously published, and continue to be so. I’ve written a bit about this important 30 year milestone for me in a recent post on my blog

Being an author is a wonderful thing–my dream job–I am really living the dream!

What would you say is the best thing about your job?

Doing what I was born to do, what comes to me as natural as breathing–and being paid to do it!

How did you become interested in becoming an author?

I always loved stories–I loved being told them, reading them, and I loved making them up. It was just so natural for me to become a writer.

Do you think your career has been influenced by your upbringing or personal life?

Definitely! I am from a very multicultural family and have had a multicultural upbringing. I was born in Indonesia of French parents (though they too had mixed ethnic origins, including Basque, Spanish, Portuguese and French-Canadian as well as French). They were working there in Indonesia after having worked in Africa before.

When I was still a baby I became very ill so I was sent back to my paternal grandmother and her daughters, my aunts (who were only teenagers then) in Toulouse, France. I stayed with them till I was nearly 4 and a half, when my parents came back from Indonesia with my two older sisters and my younger sister who had also been born in Indonesia but was healthier than me as a baby, so had stayed with them. My father then got a job with the same company, but in Australia this time, and so we went there (except for my eldest sister who was about to start high school and so stayed with my grandmother!). It was quite an upheaval–I left my grandmother and aunts, I went from being the only child in a household to only being one of four (and soon more–3 more, two boys and a girl, born in Australia!), I had to get to know my parents and sisters, and I arrived in a country whose language I did not know a word of. My grandmother and aunts only spoke French. But I went to school with my second older sister, who did speak English, and I learned the language quickly enough, little kids do of course! But I stayed bilingual as my parents insisted on us speaking French at home and would not allow us to speak English to them, English was for school and friends!

Later when we were older my mother also made us read and write in French after school. It was a bit hard at the time but I’m glad they did it! Anyway, we used to go back to France frequently, that was part of my father’s work contract, he and my mother never migrated, they were expatriates. So those experiences–the mixed origins, the unusual early childhood, the bilingualism, the being between two worlds–has really influenced my writing, in all sorts of ways. Also, my parents were always encouraging of my writing but also of all of us reading, we had lots of books and both of them are also good at telling stories–both made up ones and family history type stories. My parents also never said that you couldn’t make a career out of writing, they never pushed me on to other careers–they never did that to any of us in the family actually, those sorts of things didn’t really matter to them.

The fact I was in a big family too has also been very influential too–you learn to just get on with things if you want to do them, to find space for yourself and your dreams in the chaos, and not to be bothered by noise when you are working. Plus I used to tell stories to my younger brothers and sisters, I made up plays we could act in and also made little comic books and things like that for their birthdays.

It all I guess went into that whole mix which enabled me to launch into the writing life.

Do you feel that you’re influenced by any other creatives/authors in particular?

Not anyone specifically, no–but I have always read, and continue to read, a lot, and all that reading has, of course, influenced me. I am also very much influenced by traditional tales, especially fairytales, myths, and legends.

Do you have any other hobbies, outside of work, that influence you creatively?

When setting out on a new project where do you “find” your ideas and inspiration?

All sorts of ways: from something that’s happened to me or someone I know or have read about; from historical events; from fairytales, myths, legends, and folklore; from dreams; from sudden thoughts…it’s just being alive in the world really that gives me the ideas and inspirations. 😃

How do you decide if an idea is worth it?

I write down new ideas in a notebook and think about them on and off for a while–I’ve learned not to overthink it, but to let my subconscious mind work on it under the radar for a few days to see if it’s an idea that can fly, as it were. I don’t act on all my creative ideas. Some don’t have the potential to go anywhere really–others I might start on but then abandon, and a few I actually bring to the next stage of development.

What do you do to keep yourself motivated and interested in your work?

Try and vary it and do things other than writing as well so I don’t get burnt out.

Are you working on a specific project at the moment?

Yes, I’m working on a couple of projects actually–an adult novel which is set in France a couple of years ago, and is set around a writing retreat presented by an Australian writer but held in a beautiful village in the Loire valley–the characters are a mix of French and Australian, and it’s a multi-point of view narrative, which is a bit tricky but is working well. The other is a middle-grade novel (for kids 9-12) about a group of young friends who want to try and start a newspaper… #WatchThisSpace

The creative industry isn’t always the easiest – can you tell us about a challenge you’ve faced in your work?

I guess one of the big challenges is right now, when there is so much uncertainty everywhere, including in the arts and publishing. But as none of us know yet how that will pan out, I suppose a challenge that is pretty much always there is how you stay resilient and relevant in the face of changes in the publishing industry, especially as those have accelerated in the last few years.

I’ve learned that you need both flexibility and integrity: flexibility to be able to navigate changes and challenges by understanding how things are now, not how they were when you started your career, reading contemporary work widely but also staying grounded in the classics; reinventing your work if need be and taking opportunities to discover and learn new ways of doing things. And integrity because it is pointless to go chasing after trends which are likely to vanish in a flash, you have to stay true to yourself at your core, or else your work will be hollow, it will suffer, and readers will know that. And also I think it is super important to maintain good relationships in your professional life (as well of course, in your personal life!), to be courteous and considerate but firm when you need to be, and to understand that everyone’s approach is different.

Do you think that creativity involves putting your heart and soul into your work? Or is it more like letting your mind flow freely to witness the surprising results of your actions?

It’s both, really–it’s a marriage of heart, soul, and mind: an absolutely amazing magic, really. ✨

As a creative, what is the best advice that you’ve ever been given?

Don’t take rejection or criticism of your work personally. Which doesn’t mean you should dismiss it or accept it necessarily!

You’ve recently collaborated with Creative New England on a Short Story Competition how did you find this?

It was a lovely thing to do! Being involved in Creative New England is fantastic not just for professional creative people like me, but for anyone interested in creative activities, whether or not you intend to make it your career. It’s also about community, support, encouragement, and inspiration.

What’s your favorite thing about being a part of the New England community?

So many things actually! It’s a beautiful area to live in, so much gorgeous nature and as well our towns and villages and farming communities are pleasant places to live in. And for me, living close to Armidale has been really important, as the city has such a vibrant cultural life, with so many people engaged in the arts, such accessible opportunities for people to take part in them, as well as having great arts organisations like the New England Writers’ Centre, NERAM, NECOM, and of course the wonderful cultural and intellectual riches of UNE.  It all really fosters talent and potential. The whole of my professional career as an author has been in New England and my three children, who all grew up here, also all work in the creative industries now (not as authors, but in other creative areas). They live and work in Sydney now but all the creative opportunities they had access to as they grew up here, as well as the freedom and space they had as country kids, meant that they had a fantastic background to draw from already.

Thanks for your time Sophie, its been a pleasure learning more about you and your work!

You can check out the competition here

If you’re looking for something to keep you inspired why not check out Creative New England or join their Facebook group to keep in the loop with up and coming competitions!

There’s something for everyone! #CreativeNewEngland