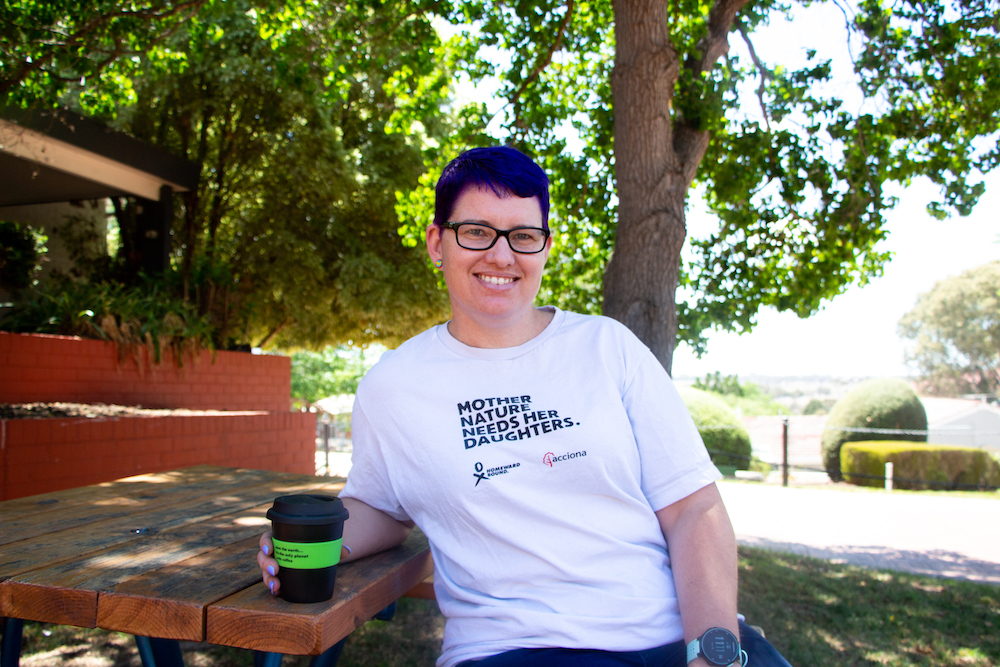 Dr. Mary McMillan is a self-proclaimed stubborn optimistic.  She has recently been promoted to Senior Lecturer for the School of Science and Tech at the University of New England – that’s a pretty awesome feat for Mary!

Yet, her academic ventures are only part of the puzzle to who she is. In fact, Mary is a woman who loves her environment, enjoys the likes of different thought leaders and finds inspiration in the relationship between people’s power and change. When you combine what Mary is passionate about, there is an abundance of hope and perseverance (and a little bit of science) which she uses to help inspire her students, and the wider community in how to see the future with optimism.

We sat down with Mary to discuss how she became an accidental scientist and why hope is society’s biggest superpower.

What is the best piece of advice you’ve ever received?

Don’t care so much about what other people think. Everyone has an opinion, but most of the time it doesn’t need to matter to you. It’s not a reflection of you if someone is going to criticise something you’ve done but rather it’s a reflection of who they are.

Tell us a bit about what attracted you to science… Are there any stories about you as a kid with science that may have triggered your interest?

I wasn’t very ‘sciency’ as a kid. I grew up on a little hobby farm so most of my childhood stories are of me with animals. Right up until I finished school I was convinced I was going to be a vet. I was always hanging around animals, and only really thought of science in relation to becoming a vet.

What did you study at University and what happened after?

Well, the plan was to become a vet… I was on a Rotary exchange in Canada after school when I realised I actually didn’t want to do that. Mainly because I’m a country girl at heart and realised that I didn’t feel comfortable moving to a big city to study vet science for five years. I decided that I wanted to become a forensic scientist instead which is what led me to study at UNE. After having watched way too many episodes of CSI and NCIS I chose to study a double degree in Science and Law because that was going to get me into forensic science.

During my first year of biology, I had a fantastic professor who taught us about DNA is and how it works. It just made sense to me and I knew that was what I wanted to do. So, I actually never finished the Law part of my double degree and instead graduated with honours with a major in microbiology. I then went on to do a Ph.D., after receiving a scholarship at the CSIRO. I submitted my thesis on stem cell biology in cattle in 2012 and graduated in 2013. I find it ironic how my life path led me to work with humans, not cows but hey, the times change. The skills I learned throughout my studies have allowed me to work on all sorts of things – not just animals. In 2013 I started working at UNE as a temporary lecturer, and in 2015 I continued my employment here as a lecturer in BioMed. I didn’t have a plan throughout my studies, and I think if I didn’t take the opportunities that passed me, I wouldn’t be where I am today.

It’s important to go through life with your eyes open and grab those opportunities as they find you.

What is one thing that happens at work that you find switches on your ‘geek mode’?

Ha, probably the thing that switches on my geek mode the most at work is when we have school groups come in. I really enjoy coming up with fun activities for school kids to do and I just totally nerd out trying to think about fun and different ways we can engage them with science. I also write newspaper columns each week. That is a nice bit of freedom that I have to just go completely nerdy on a science theme, and it’s a nice creative outlet to have.

As you are a scientist, I’m sure you base a lot of your work on facts, who are some people that inspires how you see the world? Maybe there’s a few people we should start following!

Emma Becket, who is a nutrition scientist at the University of Newcastle. She does a lots of science communication as well. She had a fantastic article in the Sydney Morning Herald this week which was about the way women dress and how they should not conform to what people expect. I really admire people like her who are speaking out and taking a stand.

Alan Duffy, he is pretty cool as far as astronomers go. He is a big Astro guy, who does a lot of science communication and has really helped to popularise science.

Lisa Harvey-Smith is an ambassador for women in science and that’s something I’m obviously interested in. It’s really important we follow the thought leaders of today.

And of course, Christiana Figueres, she is the Executive Secretary for the UN Framework Convention on Climate Change and was the person that made the 2015 Paris Agreement happen. I was so lucky to have met her on a recent trip I did to Antarctica earlier this year. She is truly an inspiring woman!

She does sound pretty incredible!

The causes and effects of climate change is a discussion that we are increasingly having, yet with it can come conflict and divisiveness. Is this difficult for someone like yourself who has chosen a career in science?

At the moment, most of what we hear about climate change is very negative and it can be very easy to lose hope.

Climate anxiety is a real thing and people are struggling with the overwhelming feeling of doom or not knowing what is going to happen. What is important to know is that there is hope. We have solutions and there is continuous improvement towards finding new ways to solve the problems we are faced with. When people lose hope, they lose motivation and it becomes hard to do anything when everything feels catastrophic. Yet, what is amazing about hope is that it helps to keep you moving forward.

Christiana Figueres said something once that really stuck with me, and that’s if you’ve given up hope then you have given up. She’s a stubborn optimist that believes we can change and we will change. I have chosen to prescribe to her stubborn optimism because it is important people see how hope is a way of overcoming fear.

Keeping with our optimism, what positive changes are you seeing in our society?

I am holding one right now – my keep cup. 😁Five years ago, this wasn’t a thing, but now people freak out when they forget their keep cup. Also, there is the fact that we are all rocking up to the supermarket with our reusable bags even though many people didn’t like the idea at first and now it has become something that no one thinks twice about when they go shopping. We have seen so many different councils around the country declare a climate emergency which indicates that there is awareness within society as discussions around what we are doing become prominent.  What is also important to consider is how we all have our own choices as consumers as to where our money goes, and that’s the beauty of people power because people are starting to think about where their money is being invested and big businesses are beginning to realise that if they don’t make a change they are going to lose customers.

So… in the interest of transparency, we stalked your Instagram profile. #notsorry Anyway, found a few images that we would like a little more context on…

How did you come up with the username @theaccidentalscientist

That’s really the explanation of how I became a scientist, and really explains what I like to call a ‘series of fortunate accidents’ which led me to where I am now.

A recent post of yours shows a card that reads “Dr. Mary McMillan Senior Lecturer School of Science and Tech University of New England” and a glimpse of a cheeky Moet box in the background, what is this all about? 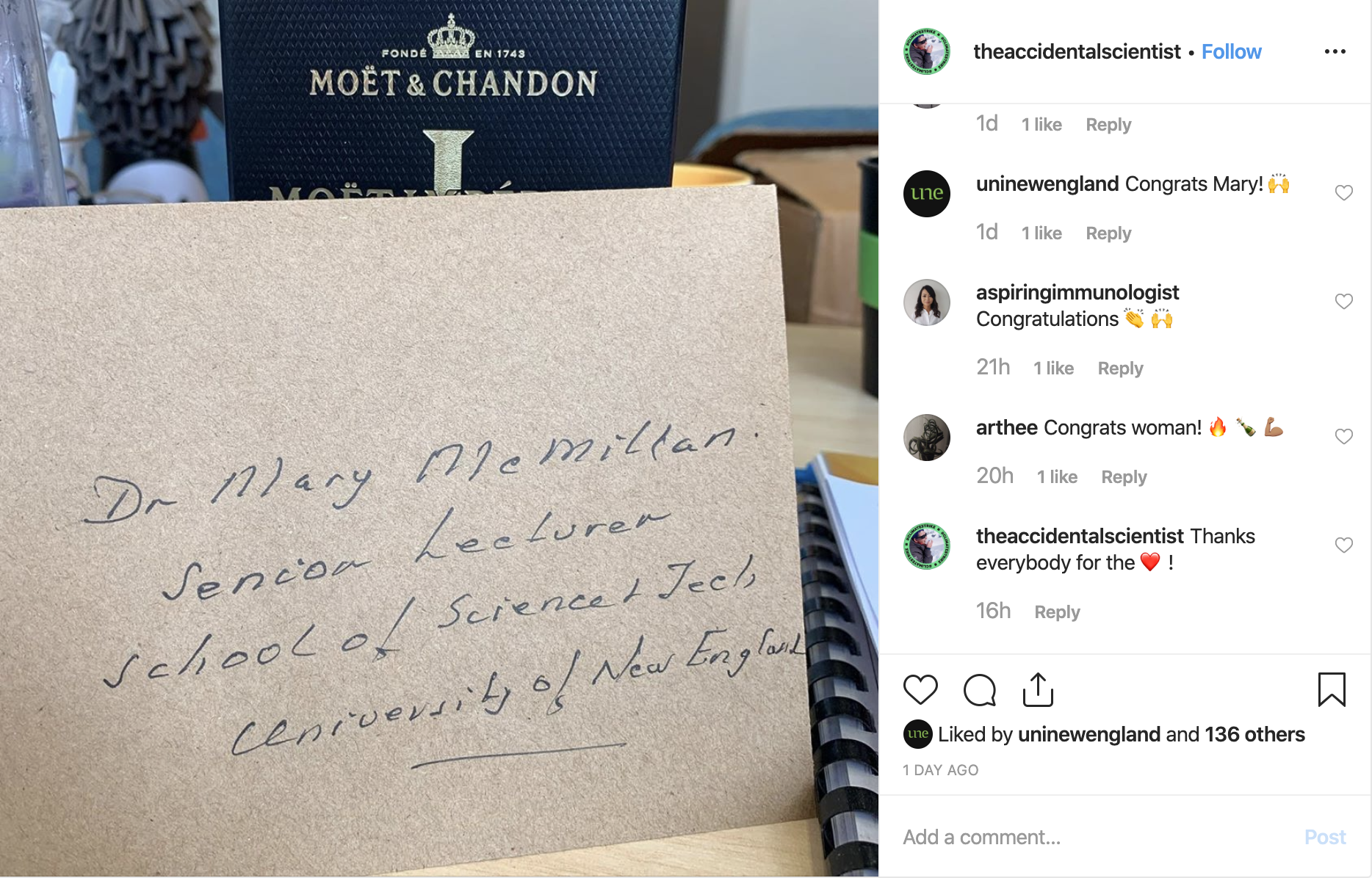 😊 That was about my academic promotion! It can be very stressful during promotion time because when you apply for it you have to really sell yourself to a committee to be selected for promotion.

After my application was successful and I found out I got the position, I realised that being a senior lecturer makes me sounds kind of old – and I can definitely say that I will refuse to conform to adulthood – I’m still going to turn up to work in my superman shirt! And, the note and Moet in the photo was from someone who helped me throughout my application process. He was so confident that I was going to this promotion that he had the card and bubbly ready before I even found out – so find yourself people in your life who have confidence in you when you may not feel it in yourself at the time.

The second image is of you at NERAM in front of a patchwork quilt on the 21st of November 2019, what happened at this event? 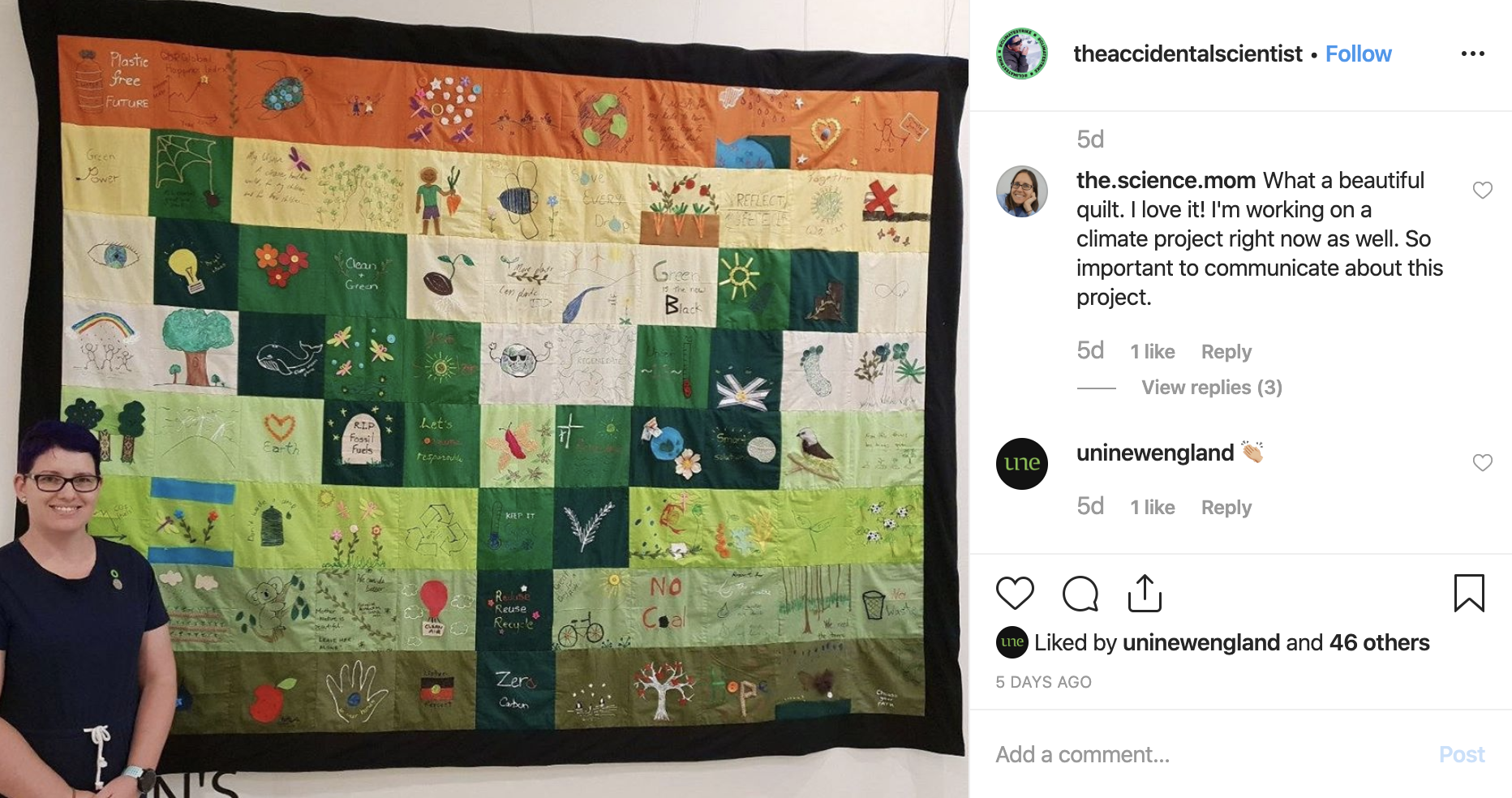 That was fun! So, in line with my idea that we all need to be a little more hopeful about the future of our environment, I did this art project a few weeks ago when we had the Black Gully Festival. I came up with the idea to have people in the community contribute to an art project. I had a pile of square fabric and asked people to decorate their square of fabric with what they hope to see in the future for our environment. After battling with my sewing machine, I turned everyone’s individual contributions into a large quilt and invited people to NERAM where we hung it for the evening. The event was a way I could present what I’d learned through the initiative and the positive messages that are coming from the community. It was really nice!

There’s a photo of a penguin from April 26, 2019, captioned “Happy world penguin day everyone. Thinking of these gorgeous feathery friends we met earlier this year…” How amazing was this trip!? 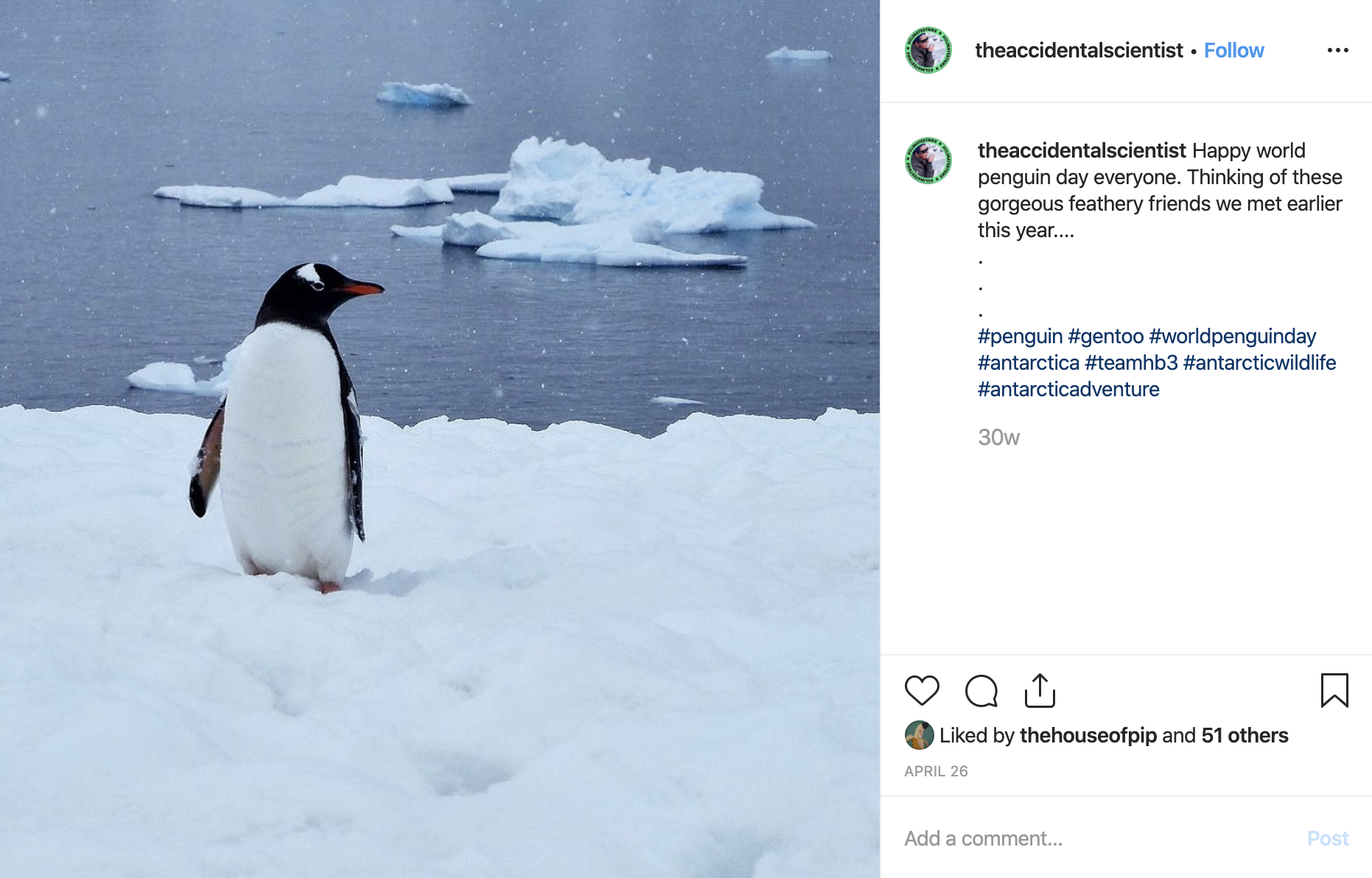 That’s a photo of a beautiful Gentoo Penguin I saw when I visited Antarctica in January. I was there with the Homeward bound leadership program for women in STEM where 80 women from all over the world working in some STEM area, end a year-long program by jumping on a ship in Argentina and sailing to Antarctica for three weeks. The program aims to put a thousand women through the program and I was part of the third year of it running. The fourth group just arrived in Antarctica yesterday. This was a once in a lifetime opportunity where I learned so much about the environment. Also, probably the highlight was being on a boat with Christiana for three weeks! Have I mentioned that yet? 😂

To end on a high note (because this is an article about optimism) What makes you hopeful for the future?

There are a whole bunch of people leading initiatives and doing a lot of cool things. When you go out and start talking to these people who are leading communities, you realise there is a lot of optimism. It’s a winning combination between awesome innovations and passionate people and it gives me hope that together, we can make a change.

Mary, you’re a legend! Thank you for sparing some of your busy time to chat with us! If you’d like to follow Mary on her  journey of fortunate accidents you can follow her on

Comfort food at its finest, Churros