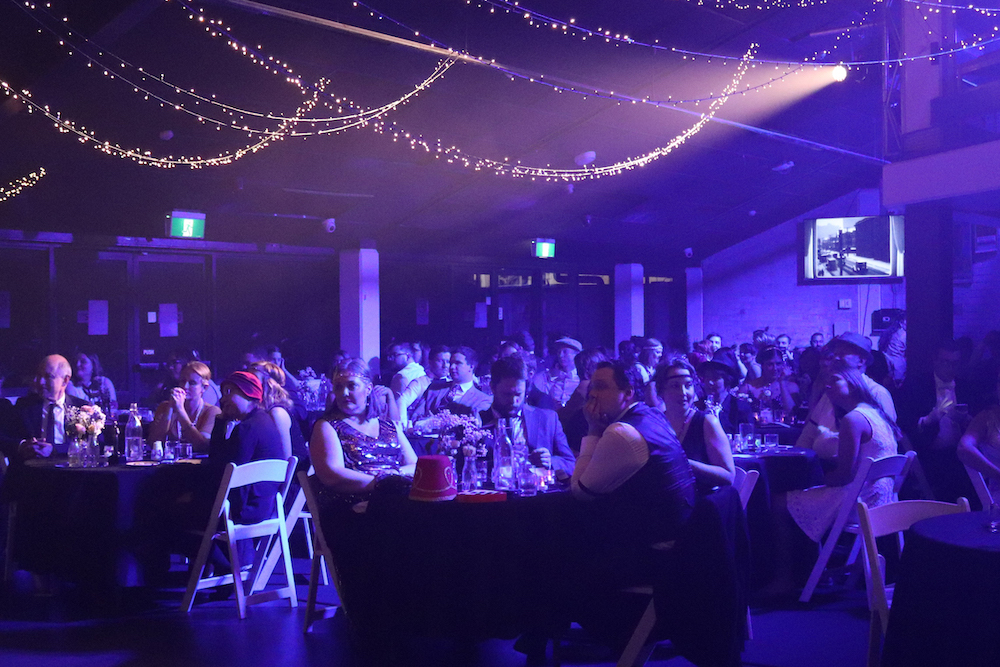 On Thursday, October 3rd, 120 guests who attended the first inaugural UNE Life Clubs Awards dressed in their finest 1920’s attire, gathered in the Northern courtyard to be entertained by members of the Friends of Theatre drama troupe and have their 20s style mug shots taken by the UNE Photography Society.

The anticipation of a thrilling night of awards and cabaret entertainment peaked as the assembled members of UNE’s finest were led mysteriously in small groups to the secret entrance to “Society”, the city’s most illustrious and Illusive Speakeasy.

With the outstanding support of Life Functions and Catering, our own ‘Stro was wondrously transformed into a 1920’s themed New York Bar with proprietor “Big Scotty” and his team dressing to the occasion and hosting an atmosphere that had the guests enthralled. Whisky Sours, Pineapple Mimosas and Charleston Fizzes were enjoyed before the curtains were parted to a Cabaret brasserie bathed in purple haze and the promise of a night to remember. 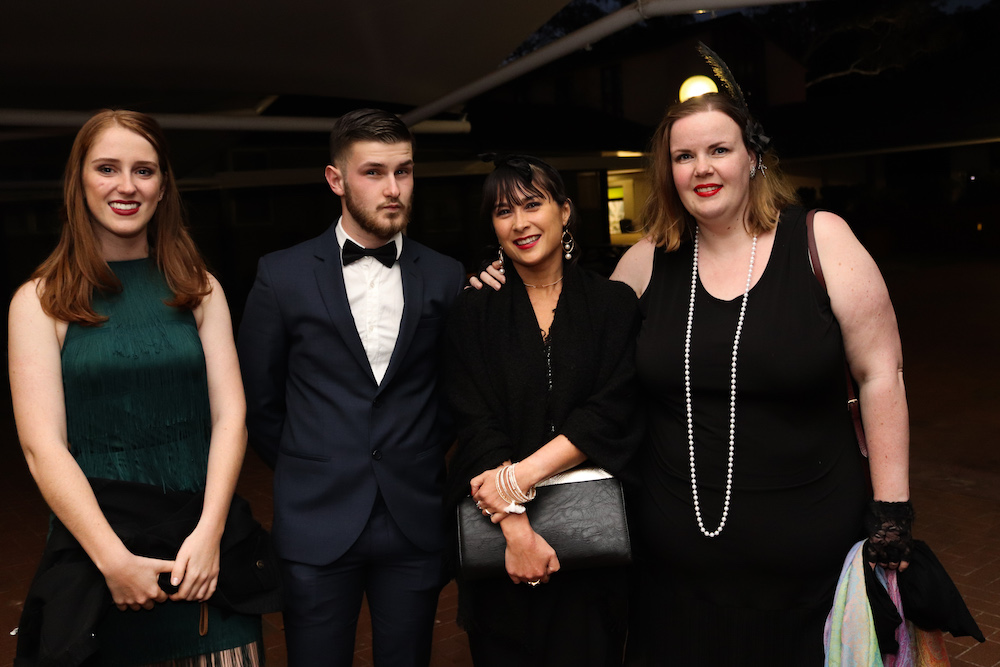 After guests were seated at tables beautifully decorated with flowers, antiques and fine porcelain combining themes of Downtown Abbey and the Chicago the Musical, the show began, and an incredible array of UNE students, including the increasingly famous “Three Tenors” (of which there was lamentably two, providing the opportunity for the boys to exercise a little humour) let their talent flow. Stunningly coordinated by UNE Life Clubs Manager, James Hudson, the team produced jazz-themed pieces highlighted by a swing version of “Never Had a Friend like me” as well as dazzlingly staged standards such as “Give ‘em the Old Razzle Dazzle”, “Baby Grand” and “He’s a Tramp”. 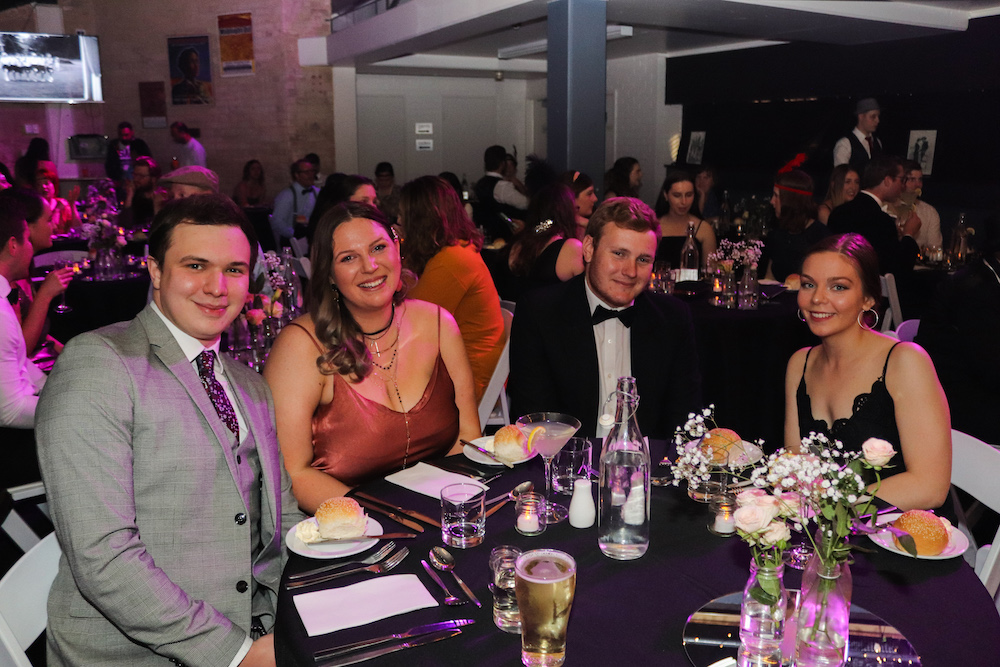 Bewitching performances from UNE’s Balinese Dancers, South Asian Dancers and the Friends of Theatre’s “Upper Crust” troupe bestowed further enchantment to an already magical evening.  Between the acts of course, was the true purpose of the night; honouring the achievements of the 2019 UNE Life club and society executives and Tune!FM volunteers.

All in all, 24 “Clubbie” and “Tuney” statuettes were handed out in recognition of the amazing work done by UNE Student leaders in creating social opportunities, career connections and an amazing campus culture experience for all UNE Students both on campus and online.

The President of the Year award presented to Laura Mallett from the UNE Medical Student Association for her outstanding contribution to the welfare of her cohort; The Ball of the year and Secretary of the Year going to the Pharmacy Society and their Secretary Jessica Eldridge, made even more impressive by the fact that PhUNE is a club whose executive and membership are comprised of mainly online students. Their efforts to fit events around Intensive schools and provide connection platforms for their dispersed membership particularly impressed the judges. 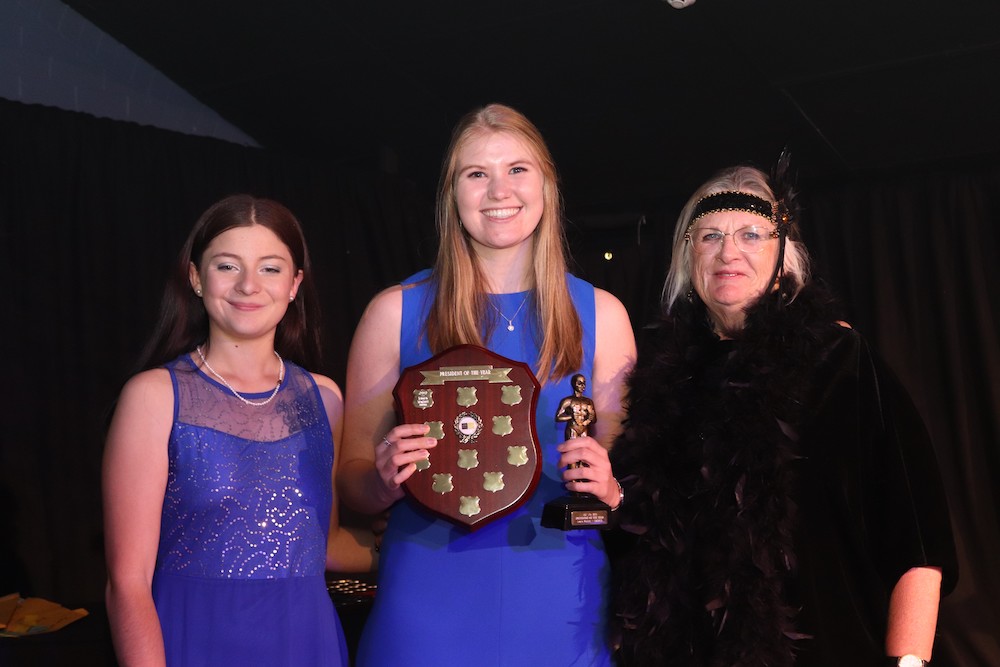 Three outstanding UNE Students were inducted in the Clubs Hall of Fame for their selfless devotion to their fellow students and the Armidale community at large. Amrit Pal Kaur, Catherine Millis, and Sophie Precians were worthy first recipient of the “Ben Bible, Hall of Fame” Award and have set the standard for students to come.

Well done to everyone involved, we’re so excited to see more of Clubs and Societies in the future – you’re really an impressive bunch!